This post has been redacted due to the hub failing after less than 100 miles, which is documented in this updated post.

I think few will disagree that flashing text and autoplay music are two things that just shouldn't be on a website.  That said, I only half hate the Shutter Precision 8 Series Dynamo Hubs webpage.  Unfortunately, the half I dislike is a considerably larger half as it's the half with loudly blaring bagpipes.  What sort of connection does a Taiwanese camera company have to bagpipes?  It reminds me of the Starburst Scottish-Korean commercial, but having now just re-watched that commercial since starting this sentence, I'm not sure I understand exactly what Starburst was going for.  I don't think Korean people with Scottish accents are contradictions as much as they are unexpected.  I guess they were just throwing something out there in the hopes that viewers would meet them half-way.  I will not.  In any case, websites should not be allowed to have loud bagpipe intros unless their URL is something like www.loudbagpipes.com or www.hopeyouhaveyourheadphonesonatwork.com, both of which are currently available.  Don't wait!  Buy those domains while you can!  Use promo code "TROYMUSTACHE" at GoDaddy.com for a 75% discount.  Good until 2020!

Now that the Alfine is dead (R.I.P.), it's time to talk about the new kid on the block.  Not that the Alfine was old (only a little over three years), just that in relation to the current new, it's the old new.  Out with the old new and in with the new new.  And the new new is a Shutter Precision PV-8 Dynamo Hub (I will not be linking the website again as it's a clickable bagpipe minefield).  When researching potential new dynamo hubs, I took a few things into consideration: reliability, durability, efficiency, weight, and price.  I took a look at the different options on the Peter White Cycles website, and it looked like I was going to end up getting another Alfine.  The only hub I would have preferred on their site was a Schmidt, but that at nearly $300, I couldn't currently justify that sort of expense (Do you know how many bicycle tours it would take to make that up?).  Plus, I'd had my old Alfine for 10,000 miles, and as a mid-level dynamo, I was very happy with that number and willing to get a second.  Also, I already knew that the Alfine would work properly with my current electrics, so I wouldn't need to worry about output power or connection type.

As always, though, I bounced my ideas off of other bike people before moving forward with a purchase, and this was how I stumbled onto those terrible bagpipes.  Travis (of Bicycle Revolutions) told me about Shutter Precision, saying that while he didn't have much experience with them, he'd heard good things about their capabilities and price point.  I was intrigued but skeptical.  I did some research, and it looked like SP produced an Alfine-priced hub with Schmidt-level weight and efficiency using their own, brand-new, patented technology (Polar Series Alignment Dynamo™).  What was the catch?  As best as I could tell, the big difference was time in market.  Shutter Precision is a very young company compared to Schmidt and Shimano.  Founded in 2007, they've only mass produced hubs since 2009 (Before that, they were a precision camera optics company, but their green-streak pushed them into bicycles.  You can read more about that here.).  They also don't come with a "50,000 miles before service" guarantee like Schmidt, so that definitely knocked the price down a bit.  I didn't need 50,000 miles from my hub, at least not on Bionic Tibor.  I'll go with a fancy Schmidt hub on my next bike, after this blog blows up with six-figure ad revenue and I stop buying my jeans at Marshalls.

Back to the hub and why I think it's the bee's pajamas, here's a review of SP Dynamo Hubs from Bike Touring News, a more reputable source than myself.  I now had my heart set on the SP PV-8 hub, so I ordered a 36-spoke version and impatiently waited.

While I was moving to a brand new hub type, I still wanted to stay with my existing Velocity Dyad rim.  That rim took the same thumping my Alfine had, but lived to tell the tale.  Sort of.  My grand plan was to get the hub and then rebuild using my old rim.  More specifically, I wanted to rebuild it myself under the tutelage of a seasoned wheel builder.  I'm fairly average on a truing stand, at least good enough to get my own wheels to acceptable levels of true, so I figured the next step would be to learn how to build one from scratch.  So when the hub arrived, I scheduled some after-hours shop time with Kyler, and when I brought in my hub and rim, he took one look at my rim and said that building on that rim was a bad idea.  Recognizing the "huh" look on my face, he showed me that the rim's sidewalls had enough brake wear that I had most likely already passed their half-life.  His recommendation was to get a fresh rim rather than to build on an old rim that may need to be rebuilt again sometime soon, possibly in the middle of a tour.

A few days later, I had my brand new hub as well as my brand new rim, and was ready to party.  Round two of the wheel build was much more successful, though not entirely successful.  We went into the shop on the second Tuesday in November, and due to other goings on that night which will remain unnamed, we only had time for him to show me how to properly lace the hub and get started on tensioning and truing.  I wasn't able to finish that night, but I got a solid foundation on wheel building.

It was a solid foundation that I promptly forgot when I went back to the shop on my own a few days later.  That day I made the rookie mistake of being impatient.  While truing in an every-third-spoke pattern, I overly tensioned some spokes, trying to reach ideal tension at a speedy pace rather than at the recommended slow and steady.  Does anyone know what happens to aluminum when you pull it really hard in one direction while holding it in place in the other direction?

After ordering a second new rim, I decided to leave wheel building to the experts, and here is the end result: 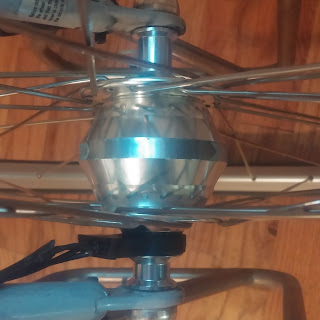 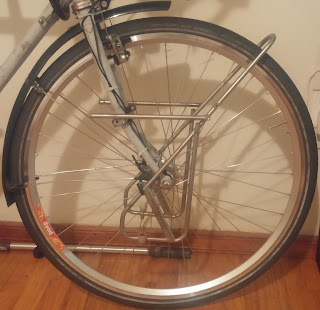 I finally had my new dynamo-hubbed wheel, but that was not the end of the story.  No, because when I brought that wheel home, and I put that wheel on Bionic Tibor, and I wired up the connector, and I secured the connector to the plug on the hub, and I gave that wheel a spin, only my headlight lit up.  My taillight stayed dim as ever, no matter how fast I spun the wheel.  Hoping increased speed might help the flow of electricity (not a thing), I took BT out for a test ride.  On that test ride, my USB charger worked once I gained enough speed (this is normal), but my taillight still stayed off.

When I got home, I inspected the wire running from my headlight to my taillight.  There were a few nicks in the wire housing, and when I pulled back part of the housing, I could see powdery, blue corrosion on the wires.  I could see the light at the end of the tunnel, but it was still just out of reach.  An hour and four solder-points later, I replaced about a foot and a half of wiring, and - Voila! - the taillight again lit up.  Bionic Tibor is once again whole.  Up next, that guy needs a thorough cleaning, degreasing, re-greasing, and rust-removing.  A bicycle owner's work is never done...
Posted by Troy at 1:27 PM

Email ThisBlogThis!Share to TwitterShare to FacebookShare to Pinterest
Labels: Review