I Broke It: Genny Hub

Well, the hub was, in fact, completely shot.  That Shimano Alfine hub had over 10,000 miles on it, spanning more than twenty states.  Wyoming tried to break it with tank track and hail.  Alaska tried to drown it with days and days of rain.  Hell, this hub had been through the white-outs of Burning Man and the off-road, desert terrain of Jungo Road that leads there.  Not to mention, this hub had ridden the pothole-riddled streets of Philadelphia since 2013, no small punishment for any bicycle.

If you couldn't tell by my back-patting, I'm pretty proud of my deceased hub (and clearly myself).  My original plan was to write out a full eulogy for the little guy, but since we don't hold funerals for severed limbs, that speech will have to wait for the day that Bionic Tibor passes on to the bicycle afterlife.  Oh man, I don't even want to think about that.  Never!  I won't allow it!  I'll just keep getting him welded until he begs me to let him die!

Anyway, after all the rain, hail, snow, mud, sand, dust, and more, that hub was a hub no longer.  Time and the elements had degraded it down to a poorly designed paper weight that would roll away from any table that wasn't perfectly level, not that the inside of it would spin, but the outside was definitely still circular and we all know what circular things do on hills.

Now is the time for solemnity and reflection while looking back on the years of memories dutifully brought about by this now fallen hub.  Memories of sunrises over smoky mountains.  Memories of friendships made over continental divides.  Memories of accomplished goals and lessons learned.  Death, or in this case mechanical failure, is a serious time for serious people.  That said, who wants to see what the inside of a dynamo hub look like after three years of riding without any service???  Travis and his fellow shop workers down at Bicycle Revolutions had a go at it, and he sent over some pictures of what they found... 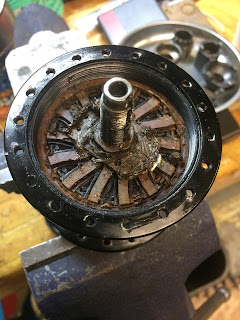 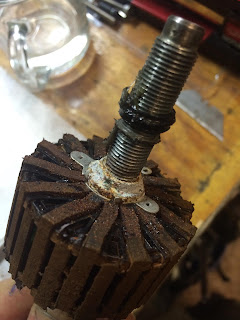 Holy moly!  That is an awful lot of rust and corrosion, an awful lot of awful rust and awful corrosion.  Serviceable?  No way.  Did I make the right call to end my tour a few days early?  Definitely.  Does it matter that I put those last fifteen rainy miles in Virginia on that raggedy hub?  Eh, I couldn't have ruined it any more than it was already ruined.  It was reassuring to see the inside of that hub, if only to let me know that buying an entirely new hub was the right call, which I had already done a few weeks back.

Now that the autopsy is complete, I feel like I can finally move on.  So much so, that I have already a new wheel built with a new type of dynamo hub.  A new hub which, in my opinion, is way prettier.  Alfine, you were a solid workhorse and you will never be forgotten, but what am I supposed to do?  Lock myself in my room, alone forever?  Sorry buddy, but it's a big world out there, and I need to get out and live in the now.  And the now is a Shutter Precision PV-8.  More on that later.
Posted by Troy at 1:25 PM